Technology for breaking down fat globules 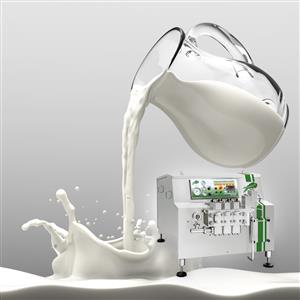 The homogenizer, was created by the French man Auguste Gaulin in 1899, and is a mechanical industrial equipment recognized and used all over the world, capable of providing several benefits to the processed product, among which is the stabilization of the emulsion, which prevents natural separation between the heavy part and the light part which otherwise would be happening by gravity.

The homogenization of milk, for example, causes the breakdown and micronization of fat globules which are reduced in size to a size lower than 1 µm (micrometer, which corresponds to one thousandth of a millimeter).

To give an approximate idea of how small the fat cells become as a result of the homogenization process, we can compare them to other, more familiar cells, such as the red blood cells: a single red blood cell has, on average, a diameter of 8 µm! If we wanted to compare them to something bigger, we could say that a human hair has a diameter ranging between 65 and 78 µm, this means that, if you would like to understand how big 1 µm is, you should cut a hair in half of its length… at least 6 times!

The fat part present in the milk goes through a shrinking process: in practice it increases the surface from four to six times but decreases its thickness. This phase eliminates the membrane that covers the fat globules and which had, among others, the function of allowing the aggregation of the particles, preventing the fat globules from returning to join together.

Homogenization allows to separate the micellar casein (the primary source of milk proteins) from the other molecules to which it naturally bounds. The enormous importance of this result is given by the fact that proteins are made more quickly available to the body, while fats, reduced to the smallest size, can be digested more easily because they are deprived of the other molecules to which they were aggregated. In practice, homogenization is comparable to a milk pre-digestion process, which occurs by mechanical and not chemical action.

To make homogenization effective, the product must reach a temperature close to 40° C because, below this limit, the fat is solid and causes an incomplete dispersion of the fat phase. The homogenizing temperatures are variable depending on the product and on the chemical result desired by the user.

There are other products, always originated by milk, such as cream for example, which have a higher fat content more difficult to homogenize. A two-stage homogenizing process has been developed for these compounds: with the first stage, the same result as milk homogenization is obtained but, in this case, it would not be sufficient to avoid particles aggregation. In fact, the greater quantity of fat requires a second homogenizing process, gearing towards the final micronization and stabilization of the compound. Our design and development work never ends, we are always looking for new solutions to make our equipment reliable, durable and with repeatable results over time.

Think about how much technology, work, and effort is behind a simple cappuccino!